It is difficult to make this anything of a letter. I have been riding for a whole week, seeing wonders and greatly enjoying the singular adventurousness and novelty of my tour, but ten hours or more daily spent in the saddle in this rarefied, intoxicating air, disposes one to sleep rather than to write in the evening, and is far from conducive to mental brilliancy. The observing faculties are developed, and the reflective lie dormant.

Nearly 150 years have passed since Isabella Bird explored the Colorado Territory on horseback. Having traveled much of the same ground myself in recent years, I’m happy to say that a great deal of the area’s wild beauty is still with us.

Isabella’s letters about her adventures are collected in the book A Lady’s Life in the Rocky Mountains.

(Posts about my library are archived through this link: ridingwithcarl.wordpress.com/tag/library.) 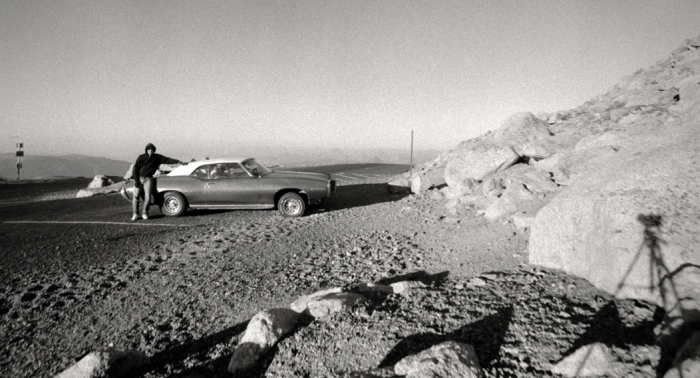 As high as the Pontiac has ever been, or ever will be: 14,130 feet (4307 m) above sea level. The Mount Evans Scenic Byway is the highest paved road on the North American continent. Due to the likelihood of heavy snow at that elevation, the road is open only from Memorial Day through Labor Day. Since I’ve never been a fan of summer travel, I pushed it as late as possible and made my ascent on Labor Day, September 7, 1998.

I rose early and left the town of Idaho Springs well before sunrise. There was some delay getting on the road because the Pontiac did not want to start in that cold, thin air. I was able to get it going by removing the air filter and wedging open the choke plate with a screwdriver. If Idaho Springs (elevation 7526 feet) was a problem, then starting the car at the top of mountain would be even more challenging. So I left the engine running during the entire trip up and down Mount Evans.

Winding my way up the mountain in the cold and the dark, I was watching closely for deer and other beasts, and hoping that the Pontiac could handle the climb. Traffic was limited to just two or three other vehicles. I arrived at the entrance gate a few minutes before they opened for business that day, and made it to the parking area as the sun was coming up. Standing in the cool, clear, still air, I marveled at the view of the sun rising over the rugged terrain far below, and at the mountain’s long shadow extending for many miles to the west.

The wide-angle lens used here was junked right after this roll was developed, as it had quit working properly and was seriously over-exposing each frame (these black & white photos required heavy digital manipulation). Happily, the cheap disposable camera I had purchased at a gas station was there to save the day…

It would have been a shame to get this close to the summit and not finish the journey. As one who lives near sea level, I’m glad I had asked my doctor for an oxygen prescription so I could buy a tank for trips like this. On went the mask and I set out for the top of Mount Evans. This was my very first attempt at physical activity above 10,000 feet. Though only a 135-foot climb from the parking lot to the summit, it didn’t take long to learn that I needed to move slowly at this elevation. 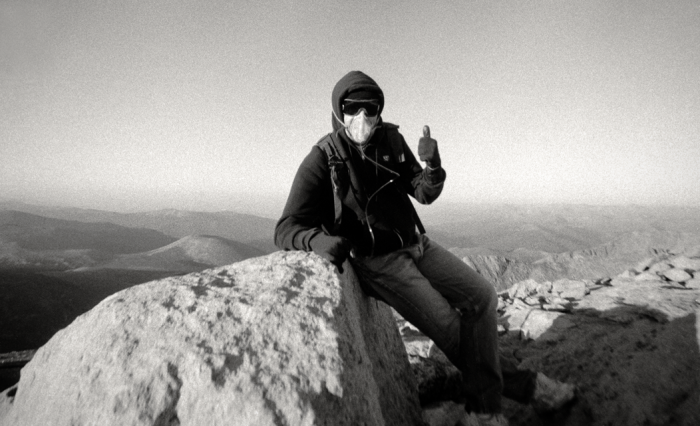 I did stand—briefly—on that highest rock, but even with the O2, I had trouble balancing there. To date, this remains the highest point I have ever visited: 14,265 feet (4348 m).

Wish I had put the top down before taking these photos of the Pontiac; at least it was lowered for the sunny ride back down the mountain.

High up on the side of a mountain, I found this yucca growing from the remnants of its former, larger self. Almost looks like an attempt at landscaping, as if someone put the yucca in a pot and placed it on this natural shelf. But I’m confident that the plant found this great spot to live and grow without any assistance from us.