I have another Silver anniversary coming up in September…25 years since my epic 7,000+ mile voyage across America (details and video below). Seems like a golden (or silver) opportunity to add several thousand miles to the odometer. So, I’ll be hitting the road late next month. I will not attempt to duplicate, turn for turn, the 1990 adventure; rather, in keeping with the spirit of that journey, I intend to explore roads that I’ve never driven before. (Although, there’s a pretty good chance I’ll revisit one of my favorite pieces of asphalt, Texas 54.) 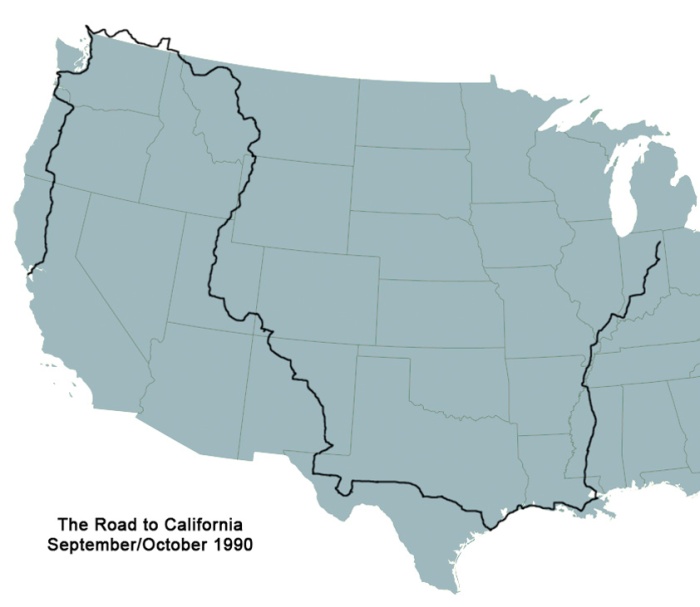 And this was a once-in-a-lifetime journey…the kind of thing you can get away with when you’re in your twenties and have no responsibilities. Having just completed my military service and with a fresh B.A. in my pocket, I grew my hair, sold most of my junk and moved to California; no job and no place to live lined up beforehand, not even any friends in the Golden State at the time. I’d worry about those things when I got there.

Since there was no schedule to keep, I decided to make the trip even more memorable by taking an extremely indirect and unplanned route…a route that, in the end, would tally over 7000 miles and 17 states, plus British Columbia; most of these places, I had never visited before.

My contempt for interstate highways was well ingrained by this time, so I avoided them for the vast majority of the trip, except at the very end, when I was quite road weary and the sky was wet. In addition to the small highways I favored, I was able to crank out many miles on gravel and dirt roads, took some ferry rides through the bayou country and got to drive down a few Gulf Coast beaches.

All of this in a 1969 Pontiac LeMans convertible which I had purchased for $1500 in cash just four months earlier and which had no shortage of potentially troublesome body and mechanical issues. Surprisingly, the entire journey was completed without a single breakdown…not even a flat tire.

Great driving weather for almost the entire route; no rain until I hit Vancouver and Seattle. The extremes ran from blazing heat with clouds of locusts in western Texas to snow covered roads high in the Montana sky.

I did stay in motels occasionally, and also with some friends along the way, but I’d often just park in a quiet spot in the wilderness and sleep in the car, or in a hammock when there were trees available. The most painful moment of the journey was the “shower” I took in a coin-operated car wash in Texas.

Knowing that this trip would be a visual smörgåsbord, I wanted to thoroughly document the experience. Since GoPro technology did not yet exist, I took my big ol’ 1987 Quasar full-size VHS camcorder (with wired remote control), stuck it to a hefty industrial-strength tripod head, and, in a display of DIY engineering that would make any backyard mechanic proud, I crafted a few mounting brackets that would allow the camera to be secured to the top of the windshield, the passenger door and the trunk. A little shaky and certainly not up to Hollywood standards, but it worked. Of course, I added plenty of tripod-on-the-side-of-the-road shots to complete the bigger picture (glad I went to the trouble…my 35mm SLR died three days out).

So, I’m the proud owner of 14 hours worth of vintage, raw VHS video, which is decaying and growing more brittle by the hour. A few years ago, I finally worked up the gumption to edit and post the first chapter of the saga, which takes us as far as New Orleans. I’ll post links to subsequent chapters if and when they become available, but no promises on how long it will take to complete this series; I’m easily distracted by my current projects.

View the video on Vimeo.com