This is a story about those gifts that just fall into your lap every now and then. As I’ve mentioned before, I haven’t had nearly enough owl encounters for my taste. Since these sightings are so rare, I treasure each one and I recall the experiences quite clearly. Back in October, I was lucky enough to add two more to the list.

The first occurred on a hot and sunny day in a tiny prairie town in southwestern Kansas. I had stopped beneath a big shady tree in the town’s park just to give myself and the car a short rest. While reaching for my water bottle, my eye caught a sudden movement in the rearview mirror. A very large bird had leapt from a tree branch and was heading my way. I turned my face toward the sky as it zoomed directly above the Pontiac at low altitude and landed in another tree up ahead. One of the most impressive things about owls is how deadly silent they are in flight, even when they are skimming just above your head. This was a big beast…probably a great horned owl. Sorry, no photos of this event.

Jump ahead about two weeks to another sunny day in South Dakota’s Buffalo Gap National Grassland. I had dedicated the entire day to exploring some dusty roads east of the Black Hills. After parking at a remote intersection to enjoy a snack and the view and the silence, I heard a high-pitched barking noise directly behind me. Prairie dog? I turned to look past the trunk and spotted an adorable bird standing near the cattle guard, bobbing its head down and up with each squawk. A burrowing owl! My first such sighting, and a nice surprise. 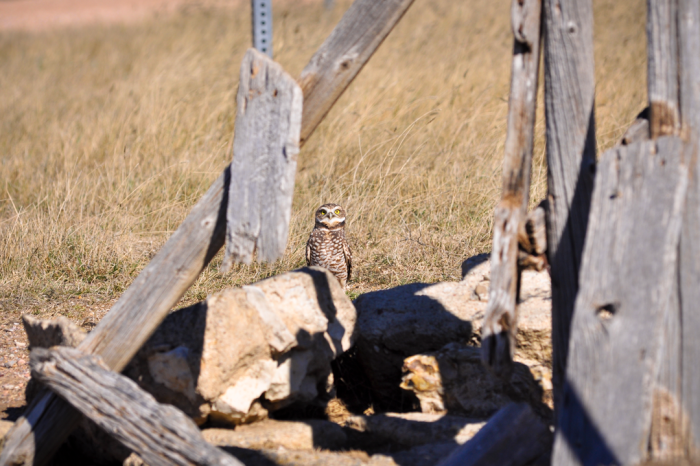 Having never met Athene cunicularia before, I had no idea how bold or shy these birds could be. I certainly wanted to get some photos of this meeting, but I didn’t want to lose valuable seconds assembling the camera. So I used the phone first to get some video; would’ve been disappointed had I missed the chance to record that voice. I slid out of the car carefully and was encouraged when the owl held its ground. After a few more barks, it jumped up and flew a tight circle around the Pontiac, just to return to the starting point and resume its barking and dancing.

You can watch that lap via this link to my Vimeo account. (Video duration is 58 seconds. You may want to boost your speaker volume to hear the owl’s call.) 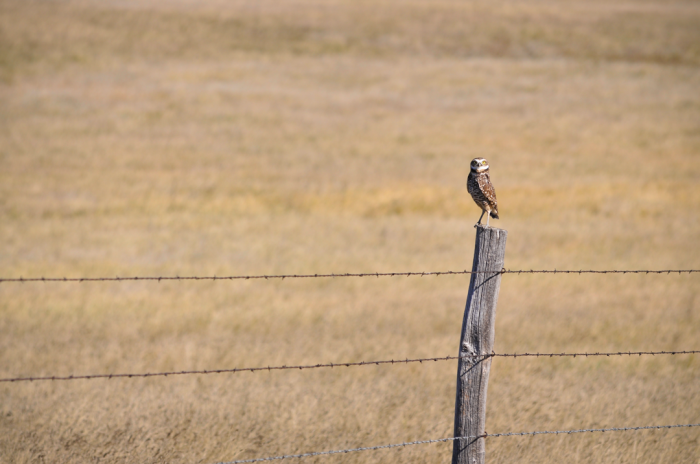 As this owl evidently had no plans to leave soon, I then grabbed the DSLR and the big lens. The owl took another lap around the car, this time landing on an assortment of fence posts along the way. Certainly not a camera-shy creature; it seemed to be deliberately perching in great spots and posing like a pro. I’ve never had a more cooperative wild subject.

Perhaps this owl was curious about the Pontiac. Perhaps it wanted to be immortalized on the internet. More than likely, it was just annoyed; I think it wanted me to leave its nesting area. So I did. Thanks for the photos, little bird. 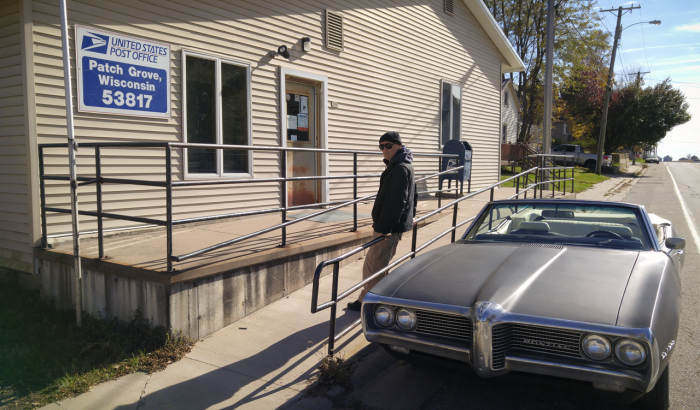 This detour through the Badger State wasn’t scheduled…it just fell into place during the drive back home last October. So, I seized the opportunity to replace yet another of the old inferior Pontiac state portraits (as previously explained in this post).

You can view the updated image collection via this link to an album in Google Photos. 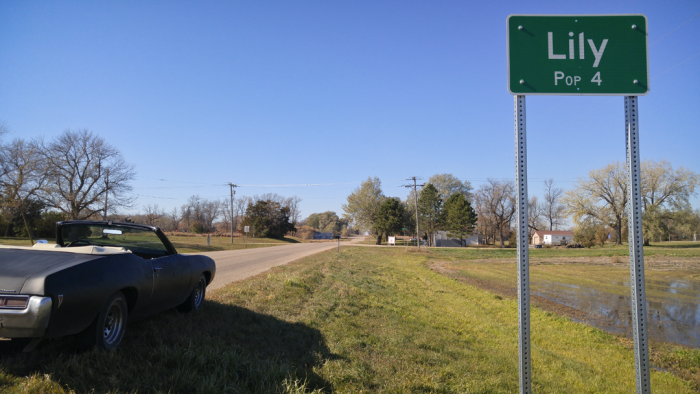 By now, you’re well aware that I love to explore the out-of-the-way places in the middle part of this continent. The great thing is that, in spite of doing this for more than 25 years, there are so many thousands of miles of roads out here that no two trips are identical; each journey is filled with discovery and its own brand of satisfaction.

Even so, I have a long list of favorite places—highways, dirt roads, scenic vistas, natural formations—that I’ll happily visit again and again whenever I happen to be in the vicinity. The list includes several tiny prairie towns that, for one reason or another, always bring a smile to my heart.

Lily, South Dakota has been on that list for many years.