Stillness and silence surround this unnamed pond in the middle of a blackened forest, somewhere in the Northwest Territories… 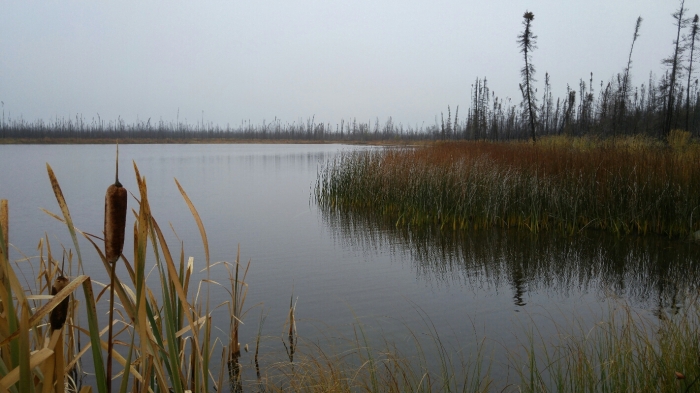 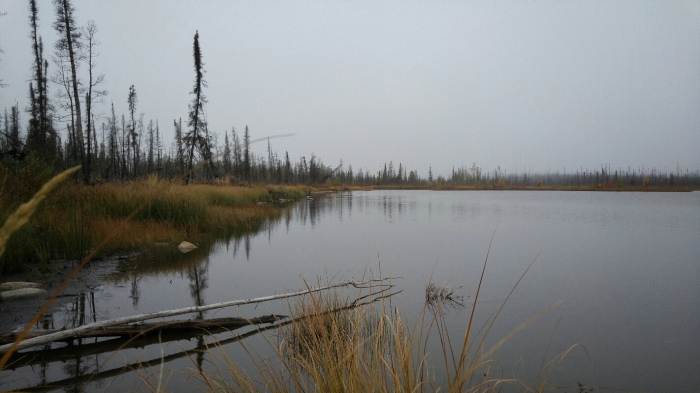 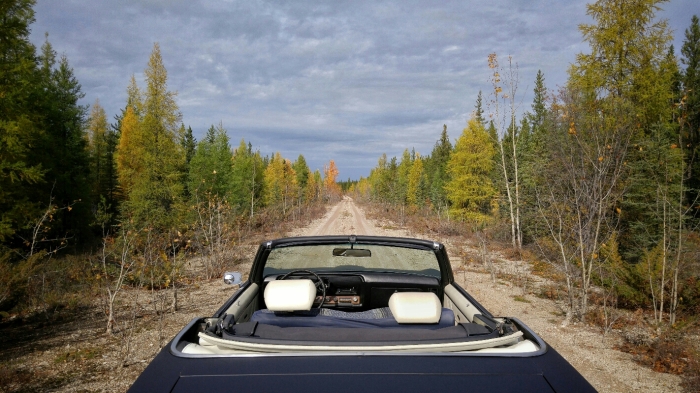 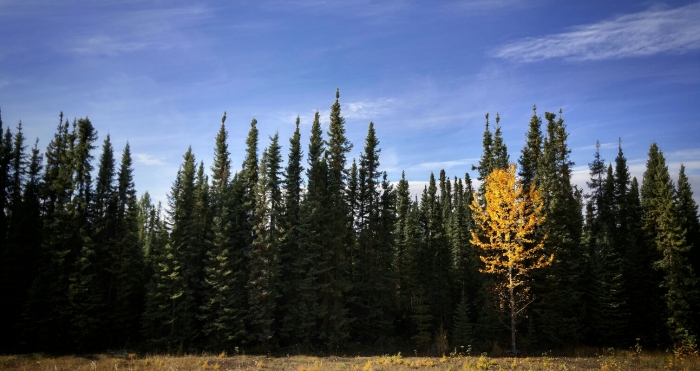 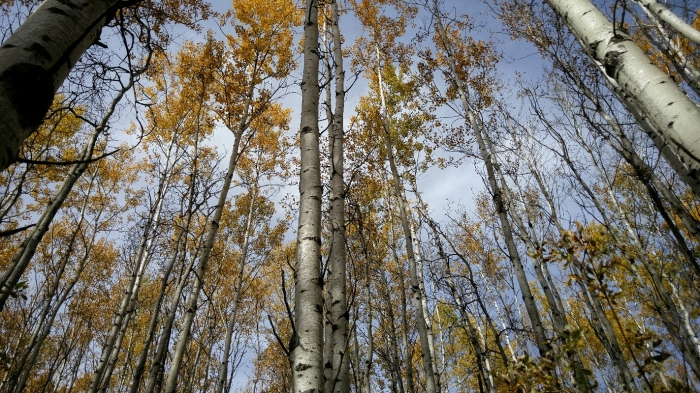 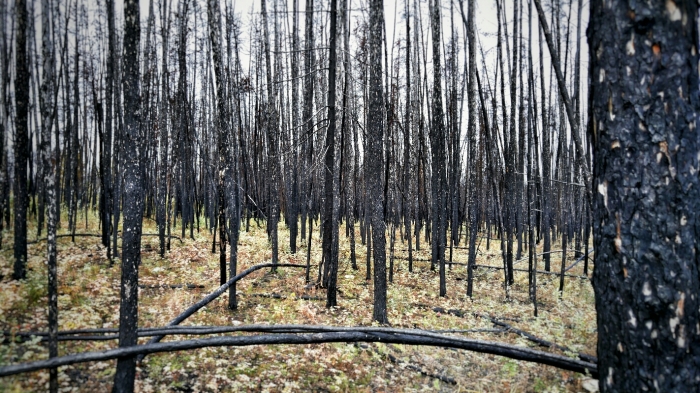 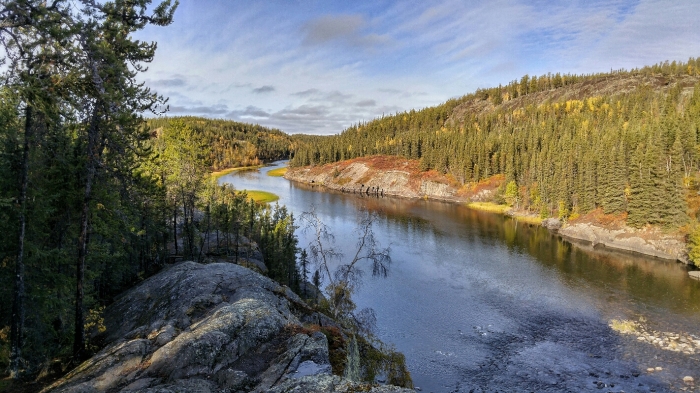 Once my journey to the end of the Ingraham Trail was thwarted, I drove back a short distance to the Cameron River Falls trailhead. It was an excellent morning of hiking through some truly beautiful terrain in the Northwest Territories. The photo above shows the section of the Cameron River just below the falls.

Starting up the trail…

No shortage of large stones in this region… 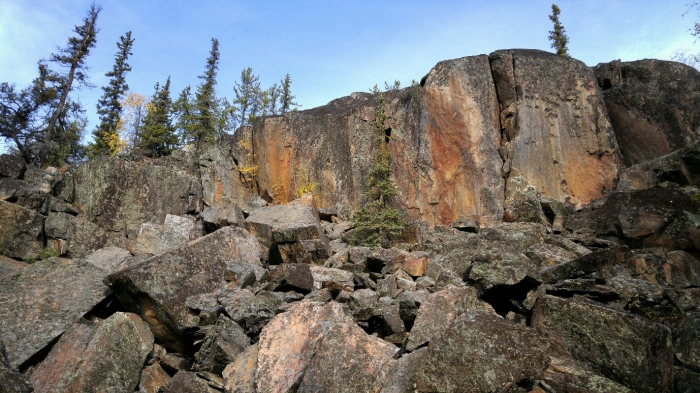 A curious spruce grouse running up the trail ahead of me; some of her friends were close by, just off the trail…

A view from one of the highest points along the route… 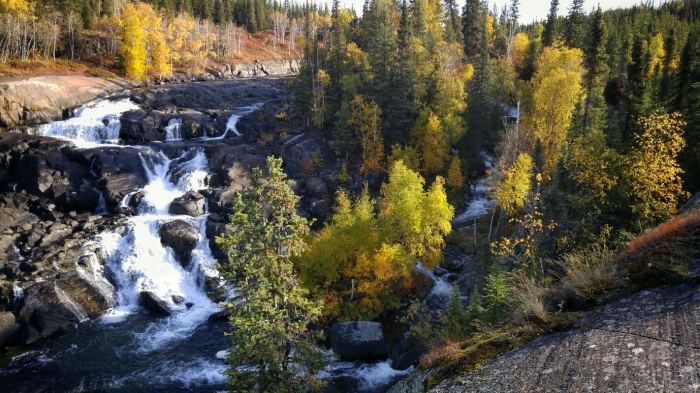 The bridge to the other side… 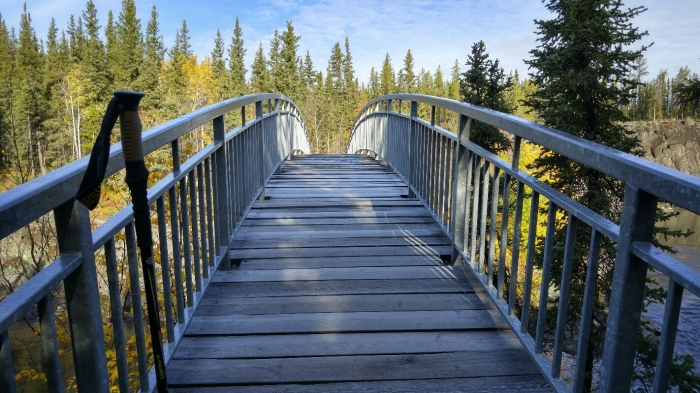 The river above the falls…

The trail on the north side allows you to get right up close to the action. This is the uppermost part of the falls. You can watch video of this scene by following this link. 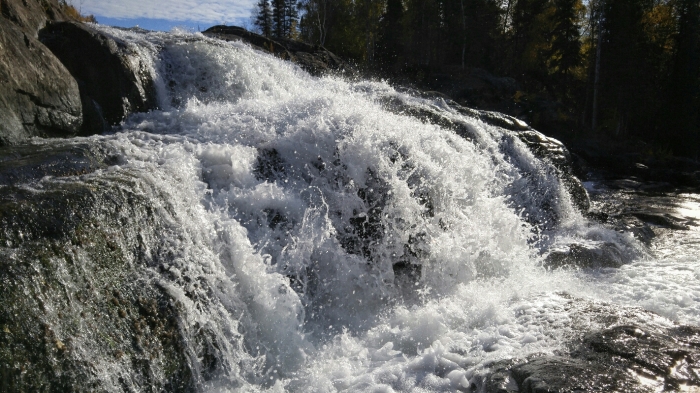 Still in the boreal forest (hey, it’s a big place). 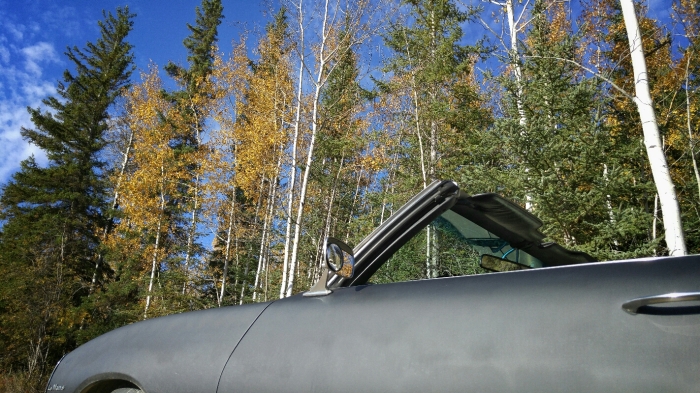 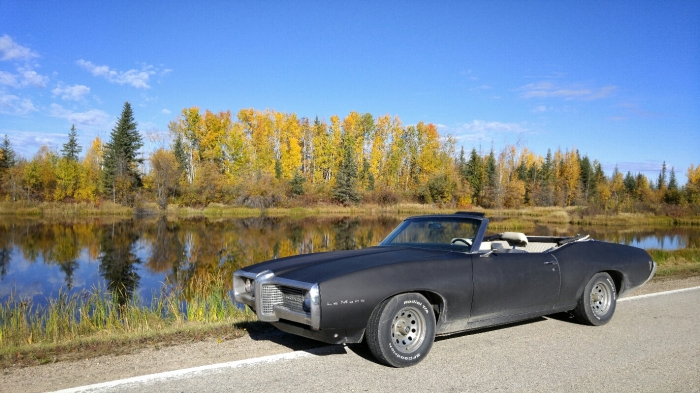 An important part of adventure travel is knowing that many things are outside of your control, and not all of your schemes are going to play out the way you expect them to. Three nights in the far northern city of Yellowknife left me with cold, clouds, rain and not a single sighting of the aurora borealis. Well, that’s weather for you…can’t plan your trip around it, can’t cry when it doesn’t roll your way. At least I got to see the lights two nights earlier in Alberta, and I still have a few nights left up north.

While I succeeded in setting a new latitude record near Behchokǫ̀, I also wanted to travel to the far end of the Ingraham Trail, east of Yellowknife, where it dead-ends at Tibbitt Lake. That’s as far as you can drive in a northeasterly direction in the Northwest Territories. I envisioned a photo of my Pontiac parked at the end of that trail with the lake stretching out in the distance. Taking advantage of a few hours of partly sunny (but cold) weather one morning, I put the top down and drove the trail for the majority of its distance, getting as far as the transition from pavement to gravel, when I ran into a crew performing heavy construction. Conditions on these northern gravel (and mud) roads change constantly, and they need frequent maintenance.

The nice lady with the stop sign told me that the road ahead was quite bad due to the recent rains, and she worried that my car might be damaged by going forward. Another gentleman with the crew thought I could probably make it through the worst spots just ahead. We conferred for a bit and, as I had driven over 3,500 miles to reach the end of the trail, I decided to give it a very cautious attempt. I followed the pilot vehicle slowly forward through the mud and rock. When I saw that full-sized pickup truck bounce violently over a line of large, sharp stones, I knew that the Tibbitt Lake photo was officially off the list. That ridge would have ripped the oil pan and exhaust system right out from under the car. I waved off and backed up to a safe place to turn around.

Disappointed? Yes. But, happily, I shrugged it off and didn’t let it ruin my day. There had already been plenty of great experiences on this long journey and I knew there would be many more in the weeks ahead. I backtracked a few hundred yards to the parking area for the Cameron River Falls trailhead. I spent a couple of hours hiking this beautiful trail through dense forest and over large slabs of ancient rock up to a stunning view of the falls (pictures forthcoming).

The photos you see here were taken later that morning, off the western end of the Ingraham Trail, at Vee Lake. A little taste of how the Tibbitt Lake photos may have turned out. As I drove up the road to this spot, a bald eagle flew low over the car…a pretty nice bonus to punctuate a great morning. 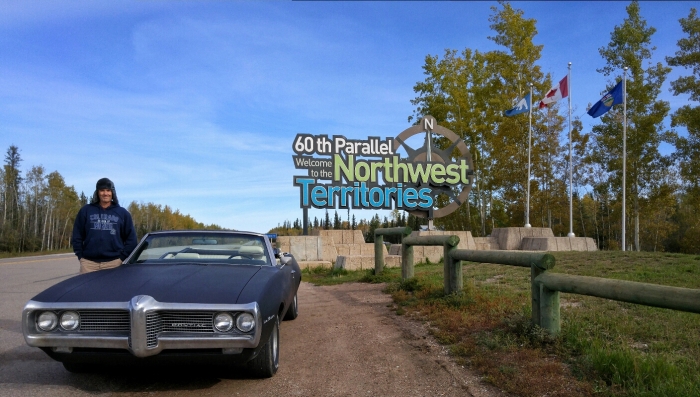 A new frontier for Carl. I’ve been dreaming of visiting here for decades.

Alone in the boreal forest.